Beginnings of Metagenomics and the emerging tree of life – Dr. Norman Pace

I had the privilege today of attending a talk by Dr. Norman Pace from UC-Boulder, who was the first to investigate the structure/function of rRNA molecules in the context of deep phylogeny. This opened the view of culture-independent microbial studies.

“Beginnings of Metagenomics and the emerging tree of life.”

Outline:
– historical context
– emergence of modern microbial ecology, “metagenomics”
– expansion of microbial diversity and the state of the big tree
– alternatives of the Woese three-branched tree of life (correct?)

Biology is not as simple as just saying prokaryotes and eukaryotes.

“Groping towards an objective describing of life’s diversity”: molecular phylogeny
(devil is in details)

Broad general advice: “Do what you can do to make your results interpretable for a larger audience!” Will drive home importance of your work.

Some genes that are homologues underwent duplications before a common ancestor.

“blast hit doesn’t mean much” the more unrelated you get

rooting the big tree, You are here: tree of life has three main relatedness groups
– origin in on the bacterial line of descent
– chrloroplasts and mitochondria are bacterial origin
– don’t need to culture to identify

In the 80s, only had mixed natural samples and catalogue so had to figure out how to characterize.

Worldwide, trend through time of cumulative number of sequences >700,000 environmental (in 2007), small percentage of cultured!

Strains of pangenome of one species of bacteria, ~30% overlap

In the face of all the genomic variation, what does an environmental rNRA sequence tell you?

Principle: representatives of a phylogenetic group are expected to have properties common to the group

To validate, multiple environments, specific harvest, abundance is validation of significance to the ecosystem

Concatenated gene sets for phylogeny == not a good idea, be careful. Can use this, as with any method, as guideline for further analysis. (Later: Has no problem with concatenated trees, as long as you’re not too deep in tree.)

Representation in databases: mostly pathogens, fecal, not much else available to understand deep phylogeny

Eocyte hypothesis is stronger if you string genes together

While rRNA is highly conserved, some people argue that it’s only 1500 charaters long so better to look at conservation and expand length of sequences looking at. But, these are poorly aligned.

“Complex archaea that bridge the gap between prokaryotes and eukaryotes.” tree from concatenation of 29 genes

Kubatko and Degnan. 2007. “Inconsistency of phylogenetic estimates from concatenated data under coalescence.”

Beyond algorithms, look at properties of cells:

Need: better ways of measuring change – informatically – which will be more reliable with better resolution to ensure we’re arriving at the right answers. One example, PAM and BLOSUM protein alignment matrices in models for deep phylogeny analysis

Jonathan Eisen: Where do viruses fit?

Nance: Viruses at the time serving as vectors moving around genes, recombination, if were to guess viruses, were around since the beginning.

Amazing to attend this talk and hear from such a principal member of this field. 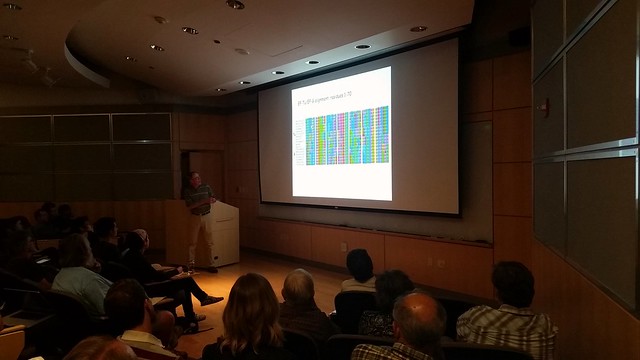 PhD candidate at UC Davis in Molecular, Cellular, and Integrative Physiology
View all posts by Lisa Johnson →
This entry was posted in talks. Bookmark the permalink.

2 Responses to Beginnings of Metagenomics and the emerging tree of life – Dr. Norman Pace